This is a painting I did for the large group exhibition we have on at the gallery at the moment.  I was aiming not so much for a serious depiction of a horse as something about the symbolic power and grace of the animal.  I was also after a bit of a surreal feeling.  You can see the whole catalogue of wonderful equine-themed artworks here: http://hillierskusegallery.com/

Crows get bad press, and I admit they are not the most tuneful of birds, but when it comes to flying, they do it with style. I love the sound their wings make – like the rustle of taffeta and the nonchalent way they skim through the air reminds me of a rower on one of those racing skiffs, just effortlessly flicking over the water.

Nevertheless, crows do have their ominous side, and I thought a stormy sky would be appropriate for him.

Here is another of my bird series, titled “The Art of Riding the Wind”. As I mentioned in an earlier post, the expression “riding the wind” is a way of describing the experience of enlightenment in Zen Buddhist and Taoist philosophy. Riding the wind is very difficult for people, but comes naturally to birds.

The work started out as one of a series of paintings of the sky in various moods. I was interested in trying to depict the boundless power and mystery of the sky. If you’ve ever looked out of an airplane window with your mind in neutral, you’ll know what I mean. Using composite aluminium panels, I airbrushed gradated layers of colour, and afterwards used oil paint to try to suggest cloud formations. The birds were later added to these panels, trying to match something of the feeling for each species of bird with the sky in each case. 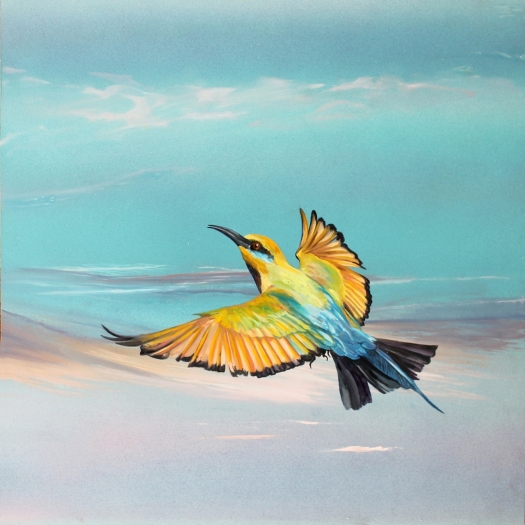 Another of this series of birds in flight. These are my sky panels re-purposed. I think the sky is equally as important as the birds, since the series is about the many facets of the art of riding on the wind.

The Art of Riding on the Wind – No. 2 – Australian Magpie
Oils and acrylic on composite aluminium panel
40 x 40 cms

This is the second of my Riding on the Wind series, featuring one of the dependents of this household, the Australian Magpie. Birds all seem to have their own style when it comes to flying. The Magpie’s is determined, efficient, but not flashy.

The work is done on composite aluminium sheet. The sky has firstly been painted on using airbrushed acrylic, followed by oil paint, and then the bird has been added in oils.

‘Riding the wind’ is a Zen expression connoting the experience of samahdi, or ‘getting it’ which can come after many years of meditation, or suddenly, as when the Zen master gives his student a sharp blow to the ear. Either way, it is a difficult thing for people to achieve. Birds, on the other hand, naturally ride the wind. They are seamlessly part of the universe. This painting is one of a series based on sky panels I had made previously. I am interested in the many different expressions of the art of riding the wind shown by various species of birds.

This is a bit of a multi-purpose work, exploring two subjects that are deeply fascinating to me – the sky and the sea. I was trying to capture an unusual pearly light that you sometimes see at dawn, and I think I’ve got at least part of the way there. I’ve called the painting ‘Sea of Dreams’ because it looks a bit surreal to me.

Painting the sky is a huge challenge, I have discovered. This is the final work for my most recently completed uni unit. I was trying to capture some really difficult aspects of the sky, such as its luminosity, its changeability, its vast size, power and mystery. In the end I discovered that painting on aluminium composite panels gave me the best results for smooth, luminous colour. There are still some technical problems to overcome, which I am currently working on.