Jewel Box is another in the series of paintings I have been doing of Mudgeeraba Creek. I was walking along the edge of the creek one day when I noticed a shaft of light coming in between the tree branches and lighting up the stones on the floor of the creek with a golden glow. The richness of the reflections of leaves and branches, and the shapes and colours of the underlying rocks seemed to create a complicated sort of Rococco pattern; not a collection of mundane objects, but a secret cache of precious things. That’s why I’ve called the work ‘Jewel Box’.

I came up with this work as part of my Fine Arts Degree work and finished it up for the d’Arcy Doyle Award. I’m happy to report that the painting has found a new home, and, not only that, but another artlover has commissioned a similar work. I’m beginning to feel that I might have found my art “niche”.

For anyone who is interested in such things, here is my artist statement relating to this work, explaining the thought process behind it.

The aim of my painting is the appreciation of the natural world as a unity in which we are not objective observers, but an integral and undifferentiated part. For me, this involves painting in a realistic style and with an attachment to place.
My recent work has been based on a single place; a rainforest stream near my home. It is not that there is anything special about this place; there are thousands, perhaps millions of such places where the basic elements of water, rock, light and vegetation come together.
In Zen Buddhism there is a term, kensho, which implies a momentary enlightenment wherein one “sees nature” and also sees one’s own nature, with the sense that there is no duality between the ‘seer’ and the ‘seen’. My goal is for my painting to open the door to a such an experience.
In the set of three, titled ‘Focus Shirt, the top panel shows a distant view, which reads as a conventional landscape painting. In the second panel , the middle ground, the patterns of shapes are becoming more abstract, and in the bottom panel they are rendered more abstractly again, with primary interest being on the distorted shapes created by moving water and the colours.

Here is how my bird panels look when put together as a single work. I am very honoured to have had this work selected as a finalist in the inaugural Holmes Art Prize run by the Regional Art Gallery of Caloundra. It is a specialised art prize calling for “excellence in the realistic representation of Australian birds”. They have attracted entries from the top nature and wildlife artists from all over Australia, so, without undue modesty, I am still wondering how I managed to get in. The show will be on from the 12th to 30th August at The Oakes Resort, Cnr. North Street and Landsborough Parade, Golden Beach. My partner Steve also has a work in the show – a beautiful painting of the Black Shouldered Kite, which I will post next.

When I did this panel as part of my cloud atlas, I found that it was my favorite one, but I couldn’t fit it into an arrangement with the others,because it was too dominant. I think it works very well just on its own, in company here with a romantic pair of Sandhill Cranes. It reminds me that while searching for enlightenment is all well and good, it’s so much more pleasant in the company of a like-minded companion.

Crows get bad press, and I admit they are not the most tuneful of birds, but when it comes to flying, they do it with style. I love the sound their wings make – like the rustle of taffeta and the nonchalent way they skim through the air reminds me of a rower on one of those racing skiffs, just effortlessly flicking over the water.

Nevertheless, crows do have their ominous side, and I thought a stormy sky would be appropriate for him.

Here is another of my bird series, titled “The Art of Riding the Wind”. As I mentioned in an earlier post, the expression “riding the wind” is a way of describing the experience of enlightenment in Zen Buddhist and Taoist philosophy. Riding the wind is very difficult for people, but comes naturally to birds.

The work started out as one of a series of paintings of the sky in various moods. I was interested in trying to depict the boundless power and mystery of the sky. If you’ve ever looked out of an airplane window with your mind in neutral, you’ll know what I mean. Using composite aluminium panels, I airbrushed gradated layers of colour, and afterwards used oil paint to try to suggest cloud formations. The birds were later added to these panels, trying to match something of the feeling for each species of bird with the sky in each case.

This work is part of the series I am doing of a rainforest creek close to my home on the Gold Coast.  I am interested in the optical intricacies created by ripples and reflections.  Where the shadows fall, you can see beneath the surface to what lies beneath.  Could this be a metaphor of some kind? 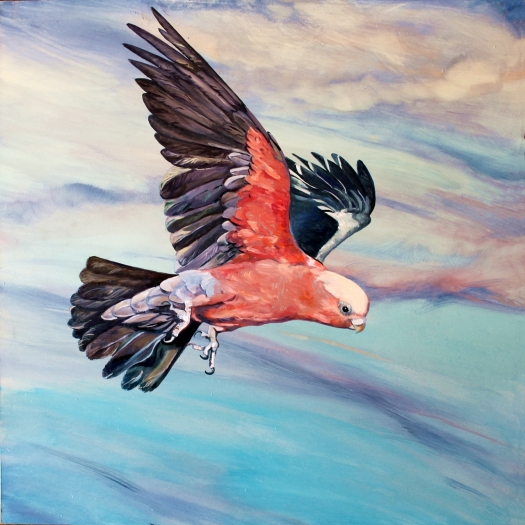 The next in my series of birds on the wing.  Galahs always have a sort of cheekiness, don’t you think?